The Work In Progress at 1922 Starkey House Bed & Breakfast 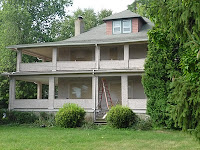 I was not sure whether to paint the stucco on the exterior of the house since it was an original style process that was used to create it back in 1922.
But after so many years of weathering, the stucco was coming loose and the color became a very dark (asphalt-looking) gray.

So, the decision was made to hire a professional group to repair, prime, spray and brush paint the house. Since the architecture is that of a Mission-style from the Arts and Crafts Period, about 1900 to 1928, or so, I had to be careful to try and stay with what would have been original choices of color. The terracotta is an earthy tone that looks especially beautiful when the trees are in full foliage but, surprisingly it looks wonderful against a snowy backdrop.

﻿﻿
﻿﻿ I thought you might be interested in the progression of the painting job from last summer as I get closer to this year's opening. It is a large house and spraying properly is not fun. But the crew of Michael Madigan from Penn Yan did a great job. Thanks boys! Oh yes, it seemed as though they were all named Jim so I had to name them Jimmy 1, 2, and 3 since they would not know to whom I was speaking if they were all working that day. Very funny!

The person who did most of the nasty spraying work was Jimmy One, which was his requested name being the hardest worker...never missed a day! Thanks! There are some nice pictures of the guys doing what they do best. Remember, it was one of the hottest summers we've had with the temperatures in the high 90's daily for the duration of the job. They were always thoughtful and courteous, and got the job done.